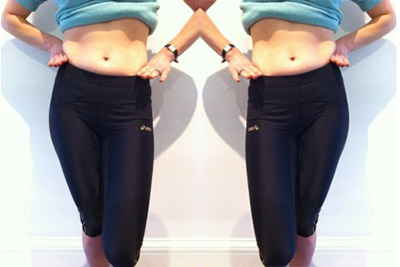 Your ITB is the band that attaches your tensor facia latae (TFL) muscle to the knee. As the ITB is not actually a muscle, it is not possible for it to become tight.

The TFL is attached to the pelvis and the knee (via the ITB).  It is possible to place increased tension through the ITB by moving one end of it away from the other- like pulling on one end of an elastic band if held between 2 fingers.

When people get pain associated with the ITB- or ITB friction syndrome as it is often called, you will get pain on the outer part of your knee, where the bony part of your knee runs under the band. If the band has excess tension on it, the band can become irritated, and the area underneath it inflamed, causing pain.

You will often get pain with stairs, pain that comes on during the run and won’t go away again until you stop running.

Inappropriate increases in training load, poor footwear and poor running technique can all contribute to the pain described, however one of the most common causes is muscle weakness around the pelvis. As mentioned above, it is the tensioning of the band that can cause pain, and there are a number of muscles that can affect the tension on the band.

Weakness around the pelvis often causes one side of the pelvis to drop in relation to the other side as you land on your leg, taking one end of the band away from the other, thus tensioning the band which can cause pain. The muscle weakness in this case is your gluteus medius.

The other thing that can happen is your knee rolling inwards as you land- called valgus knees, which again tensions one end of the band away from the other, the weak muscle in this case is your glute max muscle.

With weakness in these muscles, there is a common associated tightness in the TFL muscle, or in your rectus femoris muscle, piriformis, or quadratus laborum as they have to work too hard to compensate for your weaknesses. Tightness in the TFL itself can also contribute to increased tension on the ITB.

What can I do to help?

Resting from the aggravating activity until you do not have any pain. This will probably mean that you need to adjust your training runs to help it settle down.

Running on the flat:

Make sure that you are wearing appropriate trainers, it’s good to be looked at running when you buy your trainers

Rather than rolling our your ITB (which is the very commonly used myth!!) which in fact may make things worse as you may increase the compression over the sore area, stick to stretching out the tight muscles, that are likely to be around your hip, low back and hamstrings. (See the stretches attached). Try rolling higher up around your TFL muscle itself, or if you are rolling down the leg make sure you are rolling your outside quadriceps rather than the ITB.

Try to keep on top of strength around your gluteal muscles and your core to prevent valgus knees or Trendelenburg during running. This will become more important as the mileage increases, because the muscles will become more fatigued, and more likely to stop doing their job correctly.  I have attached some strength exercises for you to try. There are numerous exercise out there, but these are a good starting point.

If you over stride you are more likely to have symptoms from your ITB, as you will be loading your knee excessively during running. So, a quick tip is to try and keep your leg speed up when running….ITB pain is common when people have tried to train with someone slower than they are – so they end up dropping their leg speed and loading the area more.

The above tips are a very broad guideline as to what can be the common causes of pain, and how you can try to help with preventing it/treating it if you have pain. Obviously, the best way of getting to the bottom of the reason in your case why you are getting pain is to see a professional for a full assessment. That way you are targeting the correct area for you, rather than working on all areas that may not be your specific problem area.